With influences of Portishead, Massive Attack,

and Toro Gato’s debut is nothing short of a

masterpiece. From the live string quartets

paired with the haunting and fearless raw

visuals, Graham plants a flag in this new

unchartered territory. With the painfully

honest admissions on “White Flag” and “The

Unknown”, to the brutal lyrics and aggressive

production on “Sorry I Shot You”, fans get a

closer look into the notoriously private life of

Some original music production by Graham

was created over a decade ago for friend

to songs such as “Matador”.

to “Bull Cat” in Spanish was chosen by

Graham to show both the light and dark parts

of the subconscious and conscious mind, as

well as the recognition of one’s shadow self.

Graham admitted to being “genuinely

nervous” during the creative process of the

visuals for the album. Working with her life

partner Darren Genet who directed all of

the films was crucial to the evolution and

and song “Fall For You”, setting the tone for

the death of the pop dance performer and the

Kat Graham arrived at the GLAAD awards in NYC to announce her new pop music project in partnership with the organization. The artist wore...

Kat Graham celebrated the 2022 Grammy awards with Steven Tyler and friends to raise awareness for his organization Janie’s fund. Janie’s...

Toro Gato has released part 2 of her NFT collection completing the self titled debut album. The record and film are exclusively available...

Toro Gato held a record release party in New York City September 8th at Gospël to celebrate the release of the NFT Collection with...

The Toro Gato NFT music and film collection has dropped as a limited release on September 10th, exclusively on YellowHeart, the NFT...

Kat Graham appeared as Toro Gato on E! News this week to promote her latest record Swim and the release of the Toro Gato debut EP. Check...

Kat Graham reinvents herself as Toro Gato and releases the first single and music video for SWIM, off the upcoming visual EP, TORO GATO:...

Kat Graham joined Nigel Rodgers, Adam Lambert and Will.I.Am at the Disco Oasis event in Los Angeles California. The “I Got It From My...

Grammys On The Hill 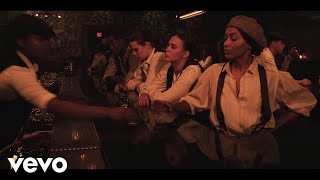 The Dance Collective is series of short dance videos choreographed by Marc Cleary and Oskar Rodriguez and performed by Kat Graham. The...

If Eye Could Get UR Attention Jumps to #2

If Eye Could Get UR Attention has climbed the pop club charts this week and is currently #2 in the United Kingdom this week!
1
234

Album: Against the Wall

Put Your Graffiti on Me

Album: Against the Wall